Home Book The Architects of Excellence

The Architects of Excellence

A journey of Purpose

Most leadership books are like instruction manuals. While they do provide some skills, they are often a dry read. We all want the knowledge but wouldn't it be nice if it could be enjoyable as well? In addition, it always helps us learn easier when you can see the skills in action as opposed to being given just steps to take. In Steven and Anthony Roberts's newest book, "The Architect of Excellence - A Journey of Purpose", you journey down the path and learn the skills of the top leaders past, present or future! Through dynamic and familiar characters, you journey through the lives of real people and see exactly how they are effected by master influencing leadership skills, as well as the lack of! You will see the uncanny similarity width your life experience and learn how to steer your course to ease and success with and through people. We guarantee that by the end of the book, you'll know these characters and want to work with them! Mostly though, you'll want to learn the lessons they learned and enjoy and guide your path as they learn to do!

"The Architect of Excellence" - It is a Journey of purpose!! 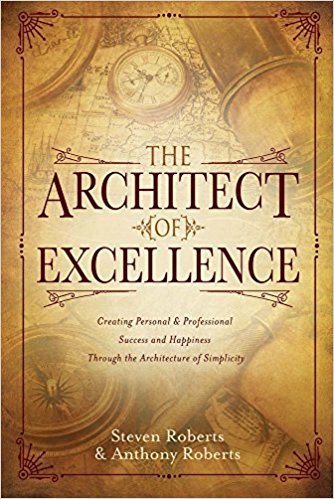 Rachel slowly brought herself back to the present, once again taking control of her thoughts and feelings. As she gained her composure, Rachel got back to work to devise a strategy on what to do about Bob Faraday’s future.

“So how are you?” began Rachel.

“Fine,” Bob said with a quizzical look on his face.

“Is everything going ok in maintenance lately?”

“Ms. Summers, I don’t mean to seem disrespectful, but I’m pretty sure you didn’t ask me here just to see how things are going.”

“No,” Rachel said with a heavy sigh, “I didn’t. Mr. Faraday, as you are aware, the company is getting behind on its printing contracts due to our main press being offline.”

“I am,” said Bob, getting a bad feeling about where the conversation was going.

“Mr. Faraday, as it is your position’s requirements to maintain the efficient operations of the plant’s machinery, management feels you share responsibility in our current inability to meet production requirements. Accordingly, you are being placed on a performance plan to ensure standards and requirements are met going forward.”

Bob could hardly believe his ears. Everyone knew the reason the main press broke down is that the CEO refused to let the machine be taken off line for required maintenance. Just as surprising to Bob was the fact that Ms. Summers was initiating this performance plan. It hadn't been two weeks ago they had discussed the printing press issue in the cafeteria, and there was no mention at all of him sharing any responsibility for the backlog. Confused and more than a little upset, Bob began, “Ms. Summers, I don't exactly understand how I share any culpability at all when we both know it was Mr. Edwards’ ‪refusal to allow the manufacturer’s required maintenance to be performed on schedule.”

As Bob was stating his case to Rachel, he thought to himself, “It's time to go. Another good job ruined by ‪leaders ‪who screw things up and then lay blame on everyone but themselves.” This wasn't the first time Bob had run into bad leaders, as he called them. His very first job was his dream job. He was hired by a Fortune 500 manufacturing company straight out of trade school as a machine maintenance associate. He worked with a team of seven, and they were responsible for more than 300 machine operation systems of all types. Their team leader always had taken the time to teach, train and coach the team members. Everyone on the team always knew what needed to be done as well as how and when it was to be done. For four years, it was perfect, and then the plant manager retired. The new plant manager replaced his immediate supervisor and most of the management staff with, “his people,” as he had called them. Within months, the exodus of employees had started. Productivity dropped. Management no longer shared information but expected employees to know what to do and when to do it. Bob referred to this as “seagull management” whereby ‪the boss ‪would fly in, crap all over everything, and fly away as quickly as he came!

Bob looked at Rachel with a defeated expression. After a short and silent pause and reflection, he said, “I guess I understand that someone needs to be a scapegoat, Ms. Summers, so when the board starts asking questions about disappointed clients and missed deadlines, there will be someone to hang out to dry. I just don’t understand why it always seems to be me. I have to tell you that I’m incredibly disappointed in the organization and in you, Ms. Summers…I used to respect this company and how we took care of each other.” With that Bob rose, sighed, and with head hanging low left Rachel’s office. When did this company turn on itself and become so toxic and negative, Bob thought to himself, as he walked back to the maintenance shop.

This site uses Akismet to reduce spam. Learn how your comment data is processed.